I think my homebirth story requires some background. I went through midwives in a hospital with our firstborn and had high hopes of having a lovely natural birth, but of course that didn’t happen. Having gone through the hospital experience once, I realized how incredibly difficult it is to get a natural unmedicated birth in a hospital environment. When we decided to have a second child, I knew I wanted it to be different. I wanted an unmedicated birth and to progress at my own pace. As eager as I was for a homebirth, our path to having a second child wasn’t that easy.

I felt lucky that we became pregnant almost instantly the second time around. But at 10 weeks along, I learned our baby had no heartbeat. While the midwife I had during that process was kind, I ultimately decided to look for another midwife the next time we fell pregnant. When we fell pregnant again, I was lucky enough to have come into contact with Shar and Carol. We met for lunch and I instantly loved them. After I asked all the usual questions, I asked what I needed to do to formalize things and we decided on the spot to work together. I was excited.

As excited as I was to work with them, it seems it wasn’t meant to be (at least yet). While I wasn’t initially worried that we were going to have another miscarriage, I got a sign that something might not be right a few weeks later and I called Shar in a panic (just a day before my first ultrasound was scheduled). She sent an immediate referral so I could get a sonogram and again I had to hear those terrible words, that our baby had no heartbeat.

Some time passed and a few months later I reached back out to Carol and Shar to let them know that we were expecting. But after having two back-to-back miscarriages, my excitement for our pregnancy was necessarily watered down to something resembling hopeful trepidation. As fearful as I was, it turns out this little babe was a keeper.

I was a couple of days past 36 weeks when I had my weekly appointment with Carol and when she walked in and asked me how I was doing I said “I’m done”. I had severe morning sickness almost every day throughout my pregnancy, it was the depths of the worst winter in NYC in years and I had heartburn, pregnancy insomnia and was completely over being pregnant. Carol joked that I couldn’t be “done” for another 6 days (until I cleared the 37 week mark) and we both laughed and continued our appointment.

A week later I was preparing to run some final errands. I had a hair appointment and a dinner date with a girlfriend I never had the luxury of seeing without our sons around. But I went to bed that night (37w 2d) and woke up around 1am to my water breaking. My water broke first with my firstborn, so I knew what it felt like. But with my first birth, my water breaking was unmistakable. It was a big gush of water. But it wasn’t the same this time. Water started to trickle out and at first I wasn’t sure, which was compounded by the fact that I had only barely cleared the full term mark. But the water just kept coming.

Given my water breaking wasn’t accompanied by any contractions and because it was early in the morning, I thought it would be better for me to hold off calling Carol and Shar. But a bit less than an hour later, light contractions started. Although it was early in labor, given my water had broken, we now thought it would be prudent to call to let them know. But one of the tasks I had on my list that week was to put the emergency midwife number (you know the one Shar and Carol ask you to call when you’re in labor) into my phone. We looked all over for it but couldn’t find it. So we called Shar and she picked up (thankfully). My husband told her my water broke and I could overhear her faintly say “oh this is fabulous, just fabulous”. When she learned my contractions were quite mild, we decided to leave things for the night and reconvene in the morning as I had my 37 week appointment the next day.

I was excited to see Carol the next day but after I had a few contractions in the early morning hours, the contractions tapered off and nothing further happened, much to my chagrin. When Carol arrived, we decided to check that my water had actually broken, and it had. From here it was a wait-and-see approach.

My son was at daycare so my husband and I went out to a long local lunch. After that we decided to head to a local coffee shop. But by the time we arrived, although I hadn’t had any further contractions, I was mighty uncomfortable and exhausted and I knew the best thing to do was retreat home for rest.

By 18 hours in, my labor was not progressing. There were no contractions, and I began to get worried about whether I might ultimately be transferred to a hospital. The idea of transferring was a horrible thought for me. But by dinner time light contractions started and we contacted Carol to let her know. It wasn’t until later in the evening that I thought things had really started progressing. I was unsure how far along I was. My contractions really hurt, but I remembered that they hurt a lot and were close together early on with my son’s birth. So I hopped on the phone with Carol and she listened to my contractions over the phone. She thought they sounded strong enough and were close enough together to come over. I was relieved – I thought my baby was coming soon.

I was busy pacing our living room having contractions and listening to my iPod. Carol and the birth assistant had set their stuff up. But after a couple of hours of what felt like strong contractions, I didn’t feel like they were getting stronger or closer together and I became more and more exhausted. I voiced this to Carol and asked her to see how far dilated I was. I was only 3cm!!!! To say I was disappointed was a complete understatement. I was defeated and, if I’m being honest, that was the low point in my homebirth. Firstly, it had been about 24 hours since my water broke. And secondly, I was operating under the hopeful assumption that my second birth would be about half the time of my first birth (or at least not longer). My son’s labor was 21.5 hours and we had easily passed that timeframe.

Carol suggested I get some sleep since it was the wee hours of the morning. I passed out relatively quickly, but my sleep was anything but restful. I kept alternating in and out of pockets of sleep, woken only to have very strong contractions that felt like they were growing stronger each time. The morning came and when we awoke, I knew my labor was really going. I told my husband to quickly call our midwife. My son left for the day and shortly after Shar arrived. That’s right, my labor was so long that we’d entered a new roster with Shar and Carol. But I was in the depths of a very long labor and I was so relieved to have her arrive.

When Shar entered my home, a calmness enveloped the air around me. She spoke few words to me, but they were all the right ones. Her touches felt reassuring and comforting. Shar saw how defeated and exhausted I looked and said to me “I know, it isn’t fair, your second labor was supposed to be shorter than your first”. I felt like she looked into my mind and read my soul. It was exactly what I felt and what I wanted to hear, and the validation was so comforting.

I continued to pace the living room, grabbing onto our railings and really moving through the contractions as best I knew how. I remember asking Shar if she could see how far along I was. I didn’t know how much longer I could handle the contractions, but she gave me a knowing look of reassurance and simply said that she thought the baby would be along soon. Shortly after that, I had an instinctive urge to move into position and begin pushing. I was so worried that I wouldn’t know how, or when, to push and that I would need to be guided, but Shar had confidence that I knew exactly what to do and she gave me constant reassurance.

Shortly thereafter, our beautiful baby girl, Audrey Evelyn McDowall, joined our family to make us a foursome (about 33 hours or so after my water broke). The first moments with our daughter were exactly as I hoped they would be. I was calm and at peace, overwhelmed with the beautiful joy that is reserved for a homebirth and so incredibly relieved to have finished what felt like an epic labor. I remember so vividly thinking that this is how birth was supposed to be. After we’d taken care of the immediate post-birth activities, my husband made us all some food and Shar, our lovely birth assistant (Lindsey), my husband and I ate food and chatted for a period while our beautiful girl laid skin-to-skin on my chest.

I would feel remiss not expressing my heartfelt thanks to Shar and Carol and their entire team for the most wonderful birth experience. If you’re in NYC, you simply won’t get better homebirth care than these ladies. They’re the best! 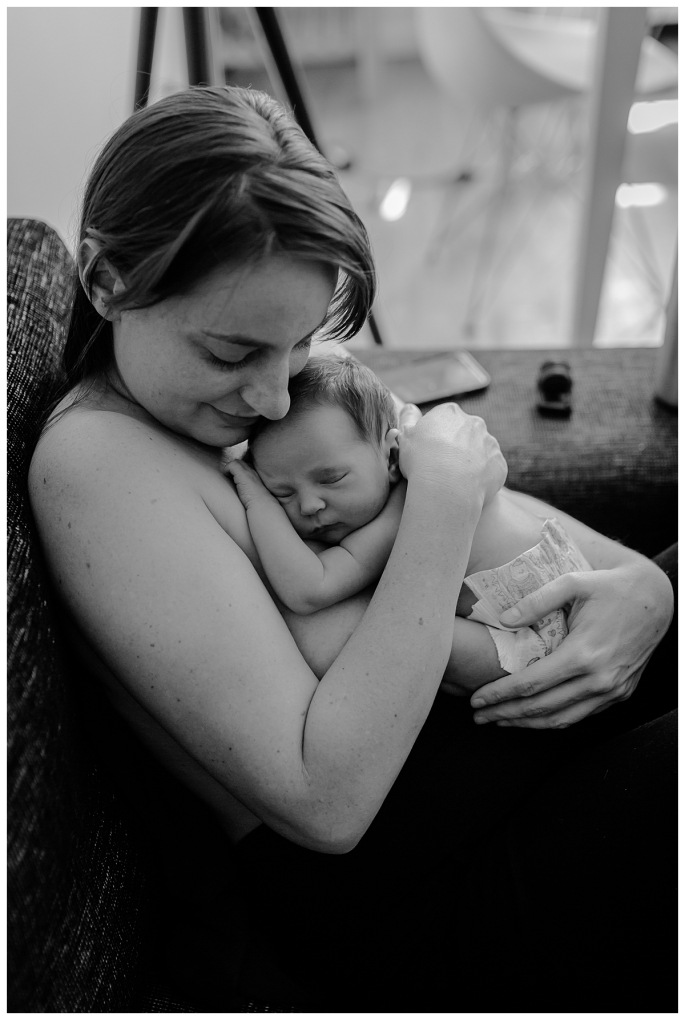